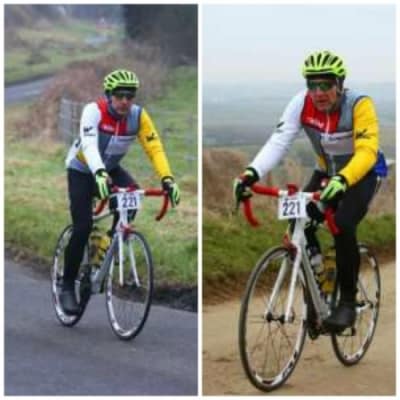 He had not been in a bicycle for 29 years but cycled off nearly 100 pounds in 6 months!

Read about Mark’s inspiring story and find out how he did it!

In January 2012, Mark Hammond, who weighs 245 pounds, decided it was time to lose weight and go back to being fit again. His history included regularly rowing and kayaking at a competitive level to struggling to climb stairs, sleep apnea, and extreme food allergies.

He started his weight loss journey by changing his bad eating habits. He was making progress and starting to feel more fit with the help of his daily session on his home rower or with a morning walk or jog.

“It was at this point that I realized I might be able to actually take a sport up again,” Mark thought. “I needed a sport that would stretch me physically. So I decided to take up road cycling because I could participate in it without being reliant on other people, and sports events seemed accessible.”

He had found out about and decided to join the l’Etape du Tour, a cycling event that allows amateur cyclists to race over the same route as with the Tour de France. “It seemed like a sufficiently mad target for a novice to set his sights on entering and finishing, 12 months after taking up cycling,” Mark said. But he was fearless and fully motivated. His heart and mind were focused on conquering this personal challenge after a year.

In May 2012, he ordered his first bicycle. “At this point, I had not been on a bike for 29 years and had declared to people that I was going to enter and compete for the l’Etape du Tour,” he said.

Not all people he had spoken to about these goals really had confidence in him. He was almost 50 years old at that time and weighed 245 pounds, had not been on a bike for 29 years, and in some ways he understood why some doubted him. But he never doubted himself. He put a lot of time, effort, patience, commitment, and dedication to losing weight and getting fitter for the event. It wasn’t easy but he did not quit. The hardest times only pushed him to pedal even harder.

All his hard work paid off and he was able to achieve his three goals, including the top one – finishing the l’Etape du Tour 2013. And for his second goal, he had even surpassed his target weight by 18 pounds! He was able to drop his weight to 150 pounds. He had never felt happier, healthier, and more fulfilled. 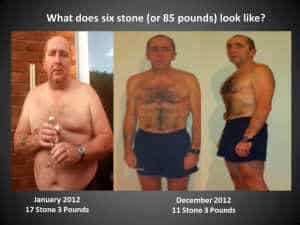 Since he started cycling in June 2012, his health has improved dramatically. “I now no longer suffer to any great extent with any food-related health issues and my sleep apnea is no longer a condition that is potentially life threatening,” he described. “The biggest improvement in my health would have to be the reduction in my weight and the overall impact that has had on my life in general.”

He had lost 85 pounds after six months. Today, having ridden a little over 200 miles, he weighs around 130 pounds, a really huge drop from 245.

“I guess the biggest indicator of how my health has improved would be my current training volume and progress on the bike,” he explained. “I currently train six days a week (a combination of cardio, strength and actually riding a bike or indoor trainer) and average around 10-12 hours training completed a week.”

Mark is now nearly half the man he used to be, but he has never felt more complete, physically, mentally, and emotionally, in his entire life. Truly, no one’s too old to change his life and lifestyle and create a healthier, more personally fulfilling life. 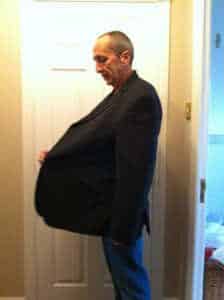 Want to try cycling as a way to lose some weight but you cannot find the right bicycle that is sturdy enough to support the weight? Visit the website of Zize Bikes, the maker of custom bicycles for every body, including bicycles for heavy peoplewhich can carry weight up to 550 pounds.

To learn more about Mark, visit his blog site at: https://39stonecyclist.com/.